Here's a link to my DerbyCon 7 talk: Introducing DeepBlueCLI v2, Now Available in PowerShell and Python


Viedo of my talk (thank you: Adrian Crenshaw): http://www.irongeek.com/i.php?page=videos/derbycon7/t205-introducing-deepbluecli-v2-now-available-in-powershell-and-python-eric-conrad 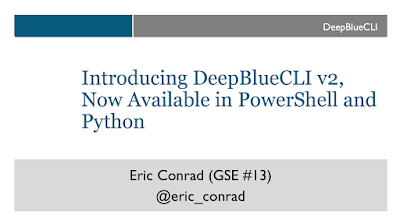 I spent some time enjoying Easter Sunday by analyzing the Shadowbrokers EternalBlue attacks vs. a Windows 7 system. It is a service-side attack vs. TCP port 445. On Monday I analyzed EternalRomance and DoublePulsar.

I will update this post as I test other exploits and victim operating systems.

EternalBlue is the 2017 version of MS08-067, which was the last universal service-side vulnerability in Windows systems. EternalRomance is a similar SMB exploit.

Promising Wireshark display filters to detect EternalBlue (unconfirmed; there may be false positives):
I disabled SMB1 on Windows 7, which stopped EternalBlue with default settings. I need to test more since EternalBlue can allegedly use SMB2. EternalRomance appears to be SMB1-only.

SMB1 is awful, and should be disabled regardless (be sure to test).

It appears Windows 2003 and XP will be vulnerable forever, barring a change in policy by Microsoft.

DoublePulsar is the backdoor (which listens via SMB or RDP) installed by both EternalBlue and EternalRomance. It allows you to inject other DLLs or code. I used it to inject Metasploit's Meterpreter payload, which will probably be a common approach once attacks take off in the wild.
Posted by Eric Conrad at 2:13 PM No comments: